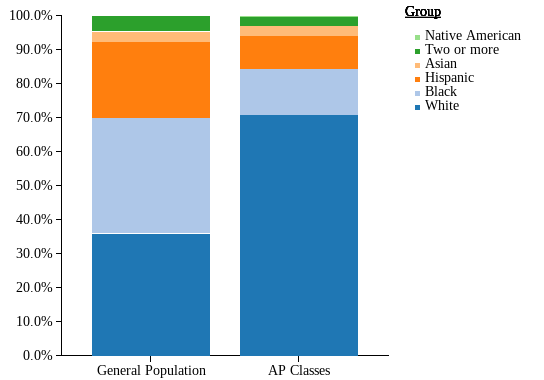 In many ways, Reynolds proudly embraces its diverse student body. On the school’s website, a “diverse student population” is listed prominently as one of the school’s strengths. And while it’s true that Reynold’s student body is one of the most racially diverse in North Carolina, the reality for students day today is that Reynolds is largely segregated, between higher and lower-level courses. White students make up about 35% of the Reynolds population, but makeup over 70% of the students in AP classes. Additionally, the majority of AP classrooms will have fewer than five black students.

“As a black student, I find that taking advanced classes I’m often placed into classes full of mostly white kids. There are rarely any other black kids,” senior Simon Fagade said.

The number one reason for classroom segregation today is a process that is known in education as “tracking”.  A phenomenon that was once labeled by the US department of education in 2014 as “modern-day segregation”.

“[Tracking is] where students are pegged on a track for certain levels of courses, your standard, your honors, your seminar, your AP, based on previous results, largely on those standardized tests,”  Social Studies teacher Joshua Campbell said, “think EOGs, EOCs, and that starts as early as 3rd grade.”

This practice of testing and monitoring students grew in popularity because of a shift in priorities in education known as “the accountability movement”.

“Public education represents a big investment of taxpayer dollars, and so you have seen,  for the last 20 years or so, what they call the ‘accountability movement’ in education,” Campbell said. “Which is to say, are we getting good returns on that investment?  And the way we have decided to measure those returns is, by-in-large, standardized test scores.”

One of the reasons this system creates such unequal results is because of inequity that exists between middle schools and elementary schools. Even though Reynolds has a large mix of people, that isn’t necessarily the case for the middle schools that the students came from.

“Elementary schools are based on zones,” Fagade said. “So elementary schools’ population is based on who lives in the area around the school, so when this happen you find that people in poorer areas and you find that poorer areas are mostly made up of black, hispanic, latino students, those are the people who get placed into those schools, and those poorer schools also get less funding. So off rip, they’re already disadvantaged.”

According to Reynolds counselor Dr. Amy Williams, it would likely be possible to make predictions of the composition of what middle schools the student in a particular class would have gone to based on course rigor.

So what can the school do to decrease this obvious disparity? There are a variety of initiatives that have been floating around the staff and administration, one such initiative that was popular particularly among the school’s history department is what is known as ‘mixed ability classes’. This policy would place students of different course levels, honors, standard, seminar, and possibly AP in the same classroom.

“So if you were a student in my civics classroom, you wouldn’t know who is an honors or standard or seminar student, it would just be ‘civics with Mr. Campbell’. And I and whoever guidance counselors, we would know who’s getting honors credit versus who is getting standard or seminar, but as far as who is in the actual classroom, it is completely mixed up and I’m teaching the exact same,” Campbell said.

Although this initiative was primarily being pushed for pre-pandemic, Principal Freeman also spoke positively about the prospect of mixed ability classes.

To combat this issue the teachers, counselors, and staff would need to encourage students that may not normally be in higher-level classes to push themselves and also devote resources to make sure that these students are successful.

One of the ways the county has already tried to enact this is through an AP bridge program which is a free program that would help students make the jump to taking AP classes.

“[The program] is offered to help students that maybe haven’t taken an AP class before to help them know what to expect and understand the rigor of it, what kind of study skills will be needed,” Williams said. “So if there are any students who are like ‘well I’ve heard about AP classes and I would like to try that but I’m a little intimidated or I’m not sure how I would manage that or what it’s gonna be like’ the AP bridge program is a great opportunity.”

Classroom segregation is still a real problem at Reynolds that affects every student and to combat it Reynolds will need to make intentional comprehensive efforts in order to integrate the student body.