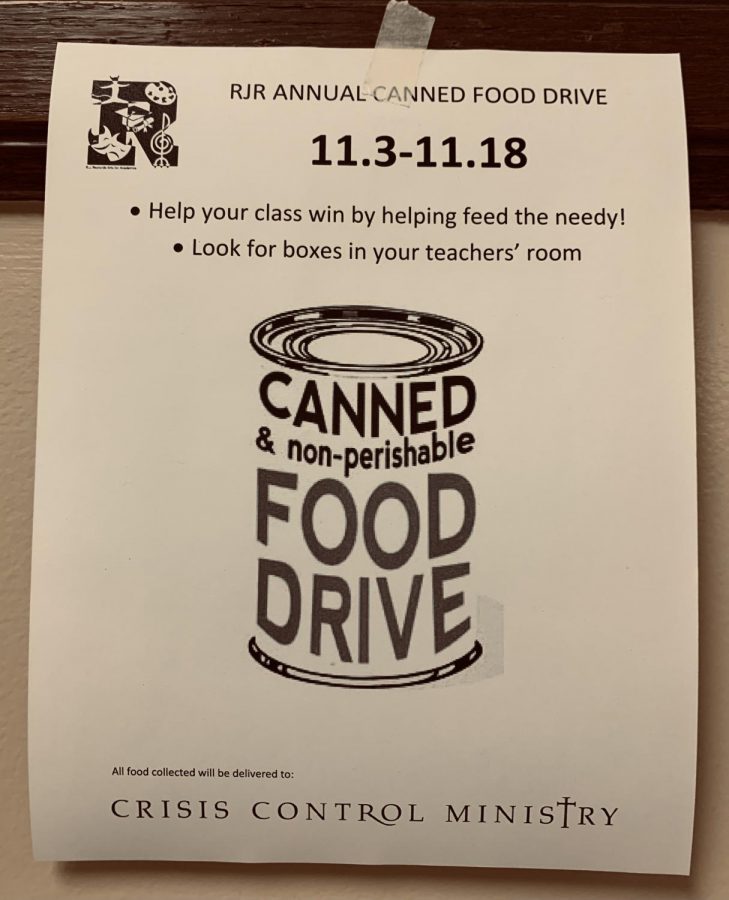 It’s a long-standing Thanksgiving tradition here at R.J. Reynolds: the Key Club canned food drive. Every year, Key Club, a boys service club through the school, initiates this food drive to collect cans that will be donated to help those in need in the greater Winston Salem area. This service opportunity helps the student body to have a more outward looking perspective and be more aware of the poverty stricken areas that are less than 10 miles from our campus.

The annual canned food drive has been going on long before the Key Club faculty advisor, John Clevenger, came to Reynolds. However, last year, in the midst of the pandemic and with no one attending in-person school the tradition was unfortunately broken.

“It’s been going on… over 40 years.” Clevenger said, “But we didn’t do it last year, so [this year] we’re trying to kind of revitalize it.”

In an effort to make up for the lost year and make this year’s drive a record-breaking one, Clevenger made flyers that you might have seen hanging in the halls to help spread the word. The flyers indicate that this year’s drive kicked off on November 3 and runs through the 18th, giving students and staff just over two weeks to collect canned and other non-perishable food. All of the items that are donated will be delivered to the Crisis Control Ministry, just in time for Thanksgiving.

In years past, the Key Club has also presented the cans at the school Thanksgiving assembly and revealed the magic number of items that were collected for that year, just before delivering them. This year however, a Thanksgiving assembly is still up in the air as there is not much time to have it because students have a whole week off for Thanksgiving break. Additionally, with COVID precautions, administrators are still trying to decide if it is smart to invite the entire student body into the auditorium.

Regardless of a Thanksgiving assembly, the show must go on as far as the canned food drive is concerned and the total number that the school is trying to beat this year is a whopping 8,000 cans.

Key Club president, senior Thomas Yates is excited about this year’s drive and wants it to be ground breaking.

“[Our hope is] to set a Key Club record for the number of cans collected.” Yates said.

Now, you might be wondering, what makes this food drive in particular so special? The Key Club food drive is a competition between all of the service clubs, teachers and their classes, at the school. Each club, class and teacher competes to be the one who brings the most cans. There is a winner from each category, one club and one teacher. The stakes? A coveted prize, a Canned Food Drive trophy.

“[The prize] is a trophy that I made out of old canned food.” Clevenger said. “No irony there at all.”

The competitive element to this service opportunity, pushes students to collect as many cans as they can, which in turn, benefits the impoverished population in our city. Additionally, it is a relatively accessible way for all students to contribute to their community.

“It is a way that you can do a simple thing to do some good in the community.” Clevenger said. “I think it is very approachable… you know a lot of folks don’t want to go out and volunteer but, ‘hey, I can bring in some food.’”

The Key Club canned food drive is a group effort to help out the people who are less fortunate in our area.