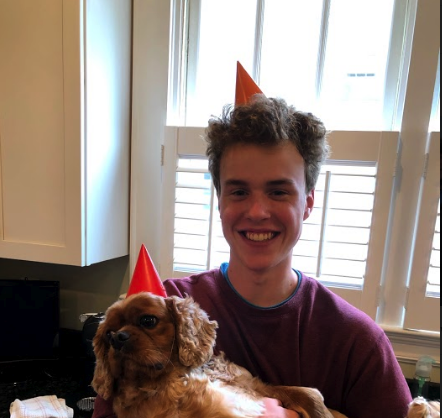 As this crazy school year draws to a close, the class of 2021 wraps up their high school career and reflects on the last four years of their life. Although it seems unfair that the last and arguably best portion of their high school experience was robbed from them as a result of the COVID 19 pandemic, these seniors have remained particularly resilient and are trying their best to finish strong regardless of the circumstances. One senior in particular, Sam Pearsall, has a positive outlook on his time at Reynolds and a bittersweet feeling about moving on to the next chapter of his life.

“I’ll probably miss the people from Reynolds most, all of the great friends I’ve managed to make and… the teachers that have been super cool,” Pearsall said.

Pearsall is a musical man and has spent much of his time throughout high school sharing his talents with the school community. He played in the Marching Band all four years, performed in every musical pit for the RJR spring musicals and was in full orchestra for two years.

“Sam Pearsall has been one of the most consistent and well-rounded students I’ve had the pleasure of teaching during my time here at RJR,” Hamiel said. “He is a great teammate and works very hard.”

So, what instrument does Pearsall play you might be wondering?

“Trombone all the way,” Pearsall said. “Last year I learned how to play baritone too which was fun, but I missed the trombone and had to come back to it.”

Hamiel explained that Pearsall has been the low brass section leader of the Marching Band for the past two years.

“Under his leadership our low brass has grown musically every year and he has also taught others how to be leaders as well. I’ve seen Sam perform his trombone part in a song and then switch immediately and play another instruments’ part (in mid-song, because that instrument/section needed some help). Sam is willing to do whatever it takes for the success of the team,” Hamiel said. “Sam is just an all-around great person! He will be missed greatly in the band department here at RJR.”

“I think playing in the pit for Les Mis freshman year was one of the most powerful experiences of my high school career, that musical was awesome,” Pearsall noted.

Apart from music, Pearsall has also developed a great interest in science. His favorite classes from the past four years include freshman year Biology with Dr. Findeis here at RJR, AP Chemistry with Mr. Bragg and AP Physics with Mr. Cavanaugh both at the Career Center.

“A common theme with those is that they’re all science classes, I think I enjoyed them so much because I really like understanding how things work,” Pearsall said.  “I find the science of things fascinating.”

Additionally, Pearsall excelled academically and he used the science skills he acquired along with other knowledge for the RJR Academic Team freshman through junior year.

This academic rigor did not go unnoticed, “One aspect that I really appreciate about Sam is that he is a student that does not make excuses. With a full workload of AP classes and several extracurricular activities any other student would not hesitate to make excuses to why they could not complete assignments; but Sam is not a student like that. It’s very refreshing to have a student that is intrinsically motivated.” Hamiel said.

As far as athletics go, Pearsall decided to try something new this spring and finished his high school career with a fun and successful Sand Volleyball season.

“Sam Pearsall came out the first week of sand volleyball practice this year with little to no experience, and went out last week at the end of our season as our most improved player of the year,” she said. “After an early season injury knocked out #1 seed Liam Keilty, Sam bravely stepped in to fill some very big shoes. I have no doubt Sam was nervous, but he never once let on as much.”

Pearsall’s first and last sand season gave him much more experience than he had anticipated.

“It takes a great deal of courage to try something new in life, let alone in the final months of your senior year of high school,” Powers said. “It was my absolute pleasure to be his coach, and I know that if he brings the same attitude, attention and work ethic to future endeavors, he will be one heck of a successful young man.”

Pearsall’s future is bright, he plans to attend the University of South Carolina in the fall and major in Biomedical Engineering.

There is no question that Sam Pearsall will be missed by the RJR community next year, but all of his hard work has paid off and he has a lot to look forward to. Congratulations Sam!