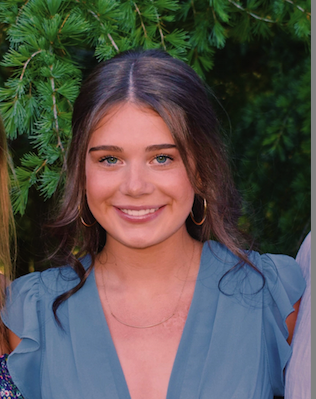 An athlete, role model, editor and volunteer, senior Isabella Garner has been an interconnecting member of the Reynolds community on all platforms. With her four coming-of-age years at Reynolds finally rolling their credits, Garner reflects on the best times and worst times, and what it has meant to be a demon.

“I would sum up my high school experience as a roller coaster,” Garner said. “I’ve met my best friends and had some of the best times.”

For the last four years, Garner has played a key role for the Reynolds field hockey team, not only as a player, but as a leader too.

“Being a player on the team has taught me a lot about cooperation, patience, teamwork, hard work, and sportsmanship,” Garner said. “Being a leader for the team comes with its responsibilities to set an example for the younger girls. You have to lift everyone up and encourage your teammates to work as hard as they can, while having their backs on and off the field.”

Although it has been challenging juggling both being a player and leader, Garner has excelled at both, growing in both aspects.

“Compared to the fall she has grown tremendously as a leader and with her skill level as a player,” Reynolds field hockey coach

Ashton Coley said. “I am extremely proud of her for all of the hard work she puts in for her and her teammates to succeed.”

Although Coley has only coached Garner for one season, she knows that Garner’s skills as an athlete will help her in the future.

“Being able to handle a sport and school is not easy,” Coley said. “Having the ability to multitask is a key factor to being a student and a student athlete. This will help her excel through college and life after.”

Looking ahead to next fall, Garner will be attending University of North Carolina Wilmington with plans regarding staying in athletics.

“I’m going to major in exercise science and nutrition and hopefully go into the field of personal training to help people achieve their athletic goals,” Garner said.

As graduation approaches and Garner’s future begins, she looks back one final time at her experience here at Reynolds and all she has learned.

“If I could give myself one piece of advice to my younger high school self, I would tell her to keep pushing through and try your best on your work even when you’ve lost all motivation,” Garner said. “High school isn’t supposed to be super easy, it’s supposed to shape you into the person you want to become in college and beyond.”