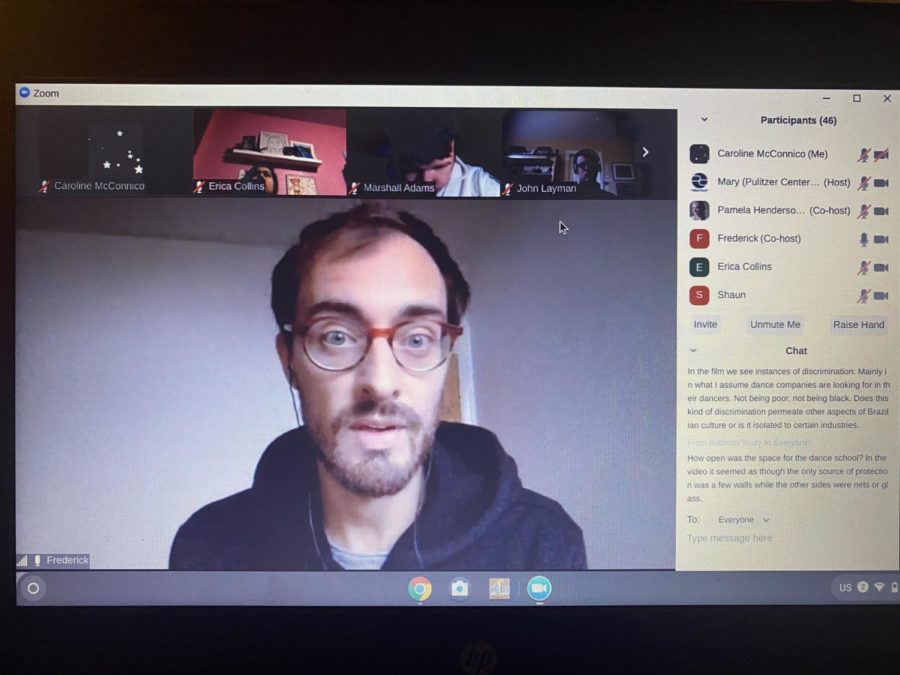 As most people know, resilience is not a one time thing. Being resilient is a constant that must not waver in order to be effective and true. Earlier this year, Reynolds hosted its second Resilience Talk. Students were delighted to listen to and discuss arts integration with independent journalist Frederick Bernas. He discussed his most popular and emotional piece titled, “Ballet and Bullets”.

“It’s one of the most incredible stories that I have ever encountered,” Bernas said. “I think that a lot of people have been inspired by it because of its relevance. The fact that this kind of story is happening serves as a hit-home for what people face everyday.”

Bernas’ story followed Tuany Nascimento, a young dancer looking to make a positive impact on her community, by starting a dance class for the girls in Morro do Adeus favela, one of the roughest towns in Brazil. The story has been used to teach and inspire students of the impact they can make on their communities.

“I used this story in my Seminar in the Arts class with freshmen,” Reynolds Music Teacher Dr. Harlee said. “Many of the students related to the violence in their neighborhoods, but most importantly they related to their resilience as artists. They talked about gymnastics, dance, writing, and other arts they were involved in and how sometimes they wanted to give up, but like the girls in the story, they found a sense of community in their program and it made them want to stick with it.”

Although Bernas is a fantastic and recognized journalist, he likes to find other ways to express himself, including film and music. As an Arts Magnet School, Reynolds can understand this kind of arts integration. Most students on campus participate in some form of an arts class, teaching them how the arts can be a community builder in any environment.

“Berna’s is a great example of arts integration himself,” Harlee said. “I love that he shared about being a musician and helping with the soundtrack for the piece. We can learn from this at Reynolds, because our arts programs have that same kind of lasting impact, not just on students, but on our audiences and the Winston-Salem community. Being connected to the Reynolds family and its story makes us central to the story of arts and education in Winston-Salem.”

While teachers enjoyed hearing Bernas discuss his incredible story, students also marveled at the impact he had made to such a violent and fragile community.

“This story relates to Reynolds students because no matter what is going on at home or with our personal life, we all make the effort to come to school,” freshman Mary Lowe Edmundson said. “Moving forward, we should change to become more appreciative of what we have and work harder to achieve our goals.”

After the seminar, there seemed to be a newfound appreciation for Reynolds and its arts community.

“This seminar has made me more appreciative for the nice dance studios we have at Reynolds,” Edmundson said. “I hope to get involved by volunteering around Reynolds more.”

As the Zoom was timing out, and Reynolds’ time with Bernas came to a close, Bernas had one last piece of advice to give regarding making an impact on one’s community.

“Don’t let anyone tell you what you’re passionate about,” Bernas said. “Don’t let that stop you from pursuing what you care about.”