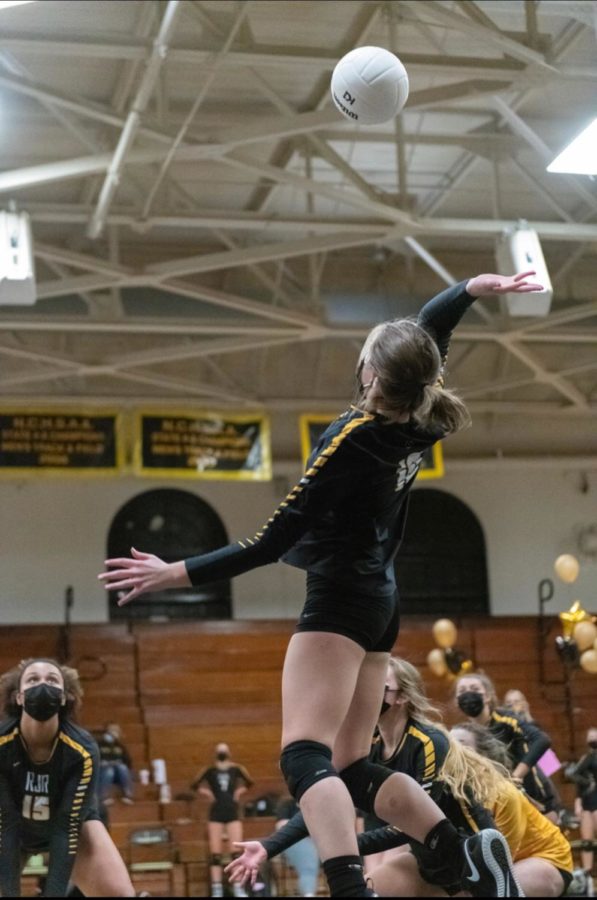 Emma Charles has been a star playing on the RJ Reynolds volleyball team for three years. But this year she graduates to attend college, leaving her friends and teammates behind. Although Charles isn’t sure where she will be going to school next year, she hopes to continue playing on a club or varsity team.

“I’ve become friends with everyone on the team and always enjoy seeing them,” Charles said.

Charles began playing volleyball six years ago in middle school, and fell in love with the game. She participates in sand volleyball outside of school, and she is also very passionate about art, but seeing all her Reynold’s teammates at volleyball is what she always looks forward to at the end of the day.

Charles also became fast friends with her coach Katie Powers, who is new to coaching the Reynolds volleyball team this year. Although they have not spent a lot of time together, Power’s has seen Charles’ talent on the court and has come to know her well this season.

“My favorite thing about coaching Emma is her quiet, steady, determined nature,” said Powers. “She’s extremely open to being coached, and she takes everything we’ve told her to heart, usually implementing it right away.”

Every year there is an App State team camp that the Reynolds volleyball team attends. It takes place in the summer, before the season officially starts. It is here that some of the team’s best memories have been made. They play volleyball all day and work hard to improve their skills, but after a day of hard work they get to enjoy each other’s company as a team and become closer.

Charles time on the Reynolds volleyball team is coming to a close, but she will never forget the memories she has made with her teammates.

“Playing volleyball at Reynolds has given me lots of good memories that i’ll always remember,” said Charles.

Even with Charles moving away to attend college next year, the bonds her and her teammates have will never fade. They have made countless memories from bus rides, to games, to practices, and everything in between. She has been an amazing asset to the team the last three years and she will surely be missed next year.