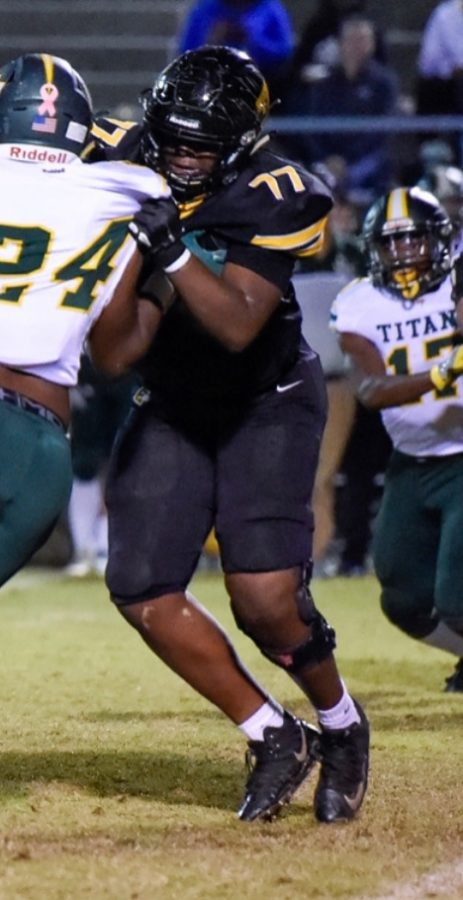 In the sport of football, offensive lineman far too often go unnoticed and under-appreciated for their enormous contributions to their respective football teams. Many disregard the fact that no matter how flashy a team’s offensive weapons may be, games are won and lost with those protecting the ones en route to the end zone.

While you could argue this may be the case at RJ Reynolds as well, it is hard to miss number 77 in black and gold. At 6 feet 5 inches and 270 pounds, senior offensive lineman Jolen Thompson is a force to be reckoned with at the line of scrimmage.

“[The] offensive line is the most important position on the field, as well as the most physically and mentally [demanding]. [For] men on the gridiron, every play is a battle in the trenches,” Thompson said.

As both a senior member of the team and player at a key position, Thompson is extremely important to the success of the Varsity Football team this year.

“I had to take responsibility as a senior and lineman to get stronger, in better shape and to be mentally prepared for this season,” Thompson said.

In preparation for a season like no other, which was pushed back until the end of February due to the NCHSAA’s revised sports calendar, Thompson and his team have had to work hard together.

“This off-season we focused on building relationships with each other and becoming brothers, whether that was pushing each other in practice or group calls,” Thompson said. “As a group we competed and pushed each other to get better.”

Thompson began playing football at the age of five, where he first served as a linebacker on the defensive side of the field. In 5th grade, Thompson was moved to the center position where he has played then on.

Since joining the Demon football program, Thompson has come a long way developing both on the football field and off as a member of the Demon community. He credits the coaching staff for preparing him for every game Friday night, as well as his next steps in life.

“The teachers and coaches [at RJR] are all on board to help us prepare for the college world,” Thompson said. “Coach Crowley has really pushed me to be a better player, to be more coachable and to develop as a leader in school as well as on the field.”

With the help of trusted teachers and coaches, Thompson has engaged in the college recruitment process and committed to a school to continue playing football. While Thompson has committed like much of the 2021 class has already done, he has not yet publicly announced it. For now, Thompson is focusing on the season ahead.

“This season I look forward to winning some football games with my brothers and changing the culture of RJR Football,” Thompson said.

Look out in the near future for: Jolen Thompson: College Commitment pt. 2 which will cover Thompson’s official commitment announcement and decision.