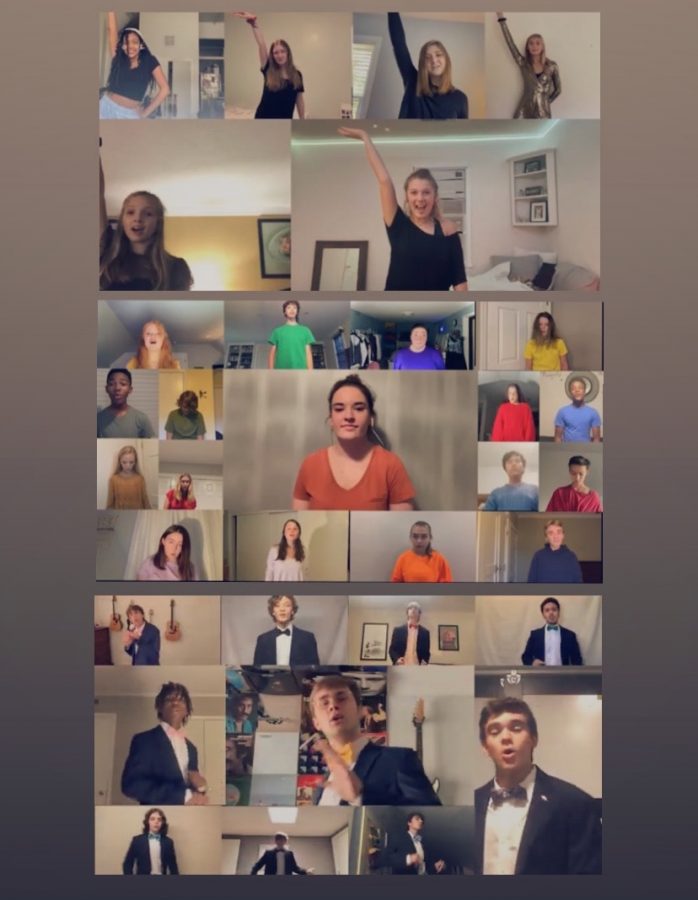 As an arts magnet high school, RJ Reynolds takes great pride in both our visual and performing arts classes. One of the most well known art related groups at our school is A cappella. Divided into four subgroups we have; Trebellious, X, Syncopate, and Acafellas.

Perhaps the most unique thing about A cappella is that it is a class, but also an extracurricular activity for students who participate. The singers spend many hours, both during and after school, rehearsing their performances. For years, these performers have shared their talent with the community through jaw dropping productions in concert. However, like most everything else in our lives, this year’s A cappella classes and performances are looking a little different.

As far as the classes themselves go, A cappella teacher, Joshua Settlemyre is having synchronous classes on zoom. However, his class has had some challenges due to the digital divide.

“The most difficult part is the individual rehearsing each voice part,” Settlemyre said. “It becomes a very tedious process and a lot of the rehearsing falls on the students themselves to learn their part. Singing over zoom is virtually impossible unless it is one person at a time because of the time lag.”

Anna Hudson, a senior Syncopate member and leader, explains that all of the students must have their microphones muted as they rehearse because zoom cannot pick up multiple audio tracks at once.

“We do class on zoom, but because of audio delays we can’t all sing unmuted, so we run through songs muted as Mr. Settlemyre shares music and rehearsal tracks on his screen.” Hudson said.

This is quite challenging for everyone. Having to practice without hearing one another is an obstacle that students are learning to adjust to and overcome.

“I think the hardest part is not being able to hear each other…it’s difficult to know if you’re singing the same thing as everyone else,” McKinnon Stewart, a junior X leader and member of Syncopate said.

This is such a challenge because A cappella is a team effort and relies heavily on singers being able to hear their fellow members in order to sing their own part, and therefore sound good together.

“Obviously it’s very hard not singing together…with that we lose a huge part of what A cappella is.” Hudson explained.

Despite the problems, the A Cappella groups did not let this stop them from sharing their talents with the community this year. Everyone worked to collaborate on video performances where each person recorded their own part. The individual videos were then mixed together and uploaded to Youtube for everyone to enjoy, creating musical brilliance in our virtual world.

X covered Dua Lipa’s “Break My Heart”, with soloist Mackenzie Clegg. Synocate did a spin on “Juice” by Lizzo featuring soloist Kendall Howard, and Fellas put together a whole medley of songs from legend, Stevie Wonder. The audio tracks were mixed by Liz May and the rest of the audio and video was edited by SoundLizzard Productions.

Each group began preparing around the same time. Stewart, who was featured in the Syncopate video explained that it took them roughly three months to produce the virtual concert.

“We started learning the song in early August and finished recording everything [by] mid-October. Then Ms. May put together the video which was finished by the end of October.” Stewart said.

The timeline for the Fellas video was similar. Conner Raposa is a senior member and leader of Acafellas.

“To get ready for the recordings fellas practiced for an hour and a half every Sunday for about two months before we recorded the audio and videos,” Raposa said.

All three of the groups worked extremely hard and put forth their best effort, even under these extraordinary circumstances.

“We have been meeting virtually once weekly outside of school time since the beginning of the year.” Settlemyre noted.

Certainly, the video concerts lack some of the energy of a live performance.

“I’m always excited about being able to perform and make art with my classmates but doing it through videos can be challenging,” Raposa said.  “The biggest part of performing is being there in person and feeding off of the energy of the audience and the people I’m performing with, so there’s definitely something lost in the shift from in person to virtual.”

However, Paul Gunter, a sophomore member and leader of Acafellas points out, “It’s different and difficult but these videos will be able to reach an audience that our live performances haven’t and I think there is good in that.”

There is no question that A Cappella has done it again. They have stayed positive and worked together to keep RJR’s tradition of musical excellence alive. If you have yet to see these videos definitely go check them out on their Youtube channel, RJR A Cappella. Also, follow them on social media to stay updated on all of their upcoming virtual performances.

The leaders are very excited about what they have achieved.

“[The videos] make me very happy because it sounds like we are all singing together again which is really awesome! I think we are all very happy that we found some sense of normalcy through those videos during this time.” Hudson said.

Mr. Settlemyre is very proud of his students.

“I would like to simply praise them for their hard work,” he said. “The students were responsible for doing the arranging, rehearsing, and making their performances and they deserve all the credit. The only thing I did was simply give them the ‘canvas’. They painted the picture.”