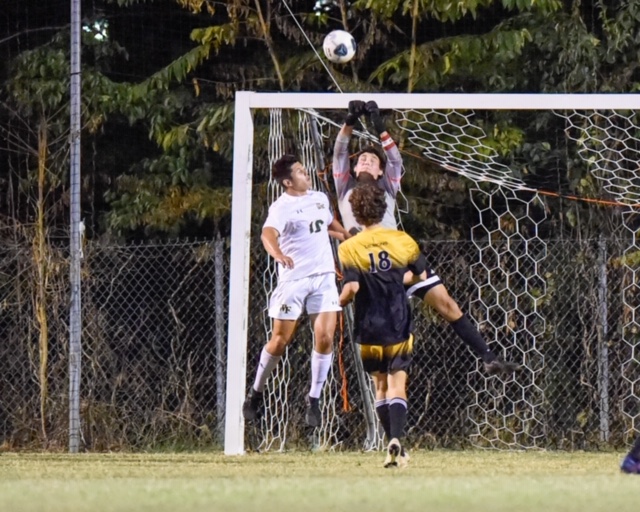 Senior Noah Gottlieb is an instrumental part of the varsity boys’ soccer team at RJ Reynolds. He manages to balance a rigorous academic schedule, being a captain of the soccer team and an active member of Key Club. Gottlieb is the starting goalie on the team, and the Demons secured the number one ranking for 4A division high school soccer in North Carolina.

Gottlieb began playing soccer at the age of 5 years old for Twins City’s recreational league. Ever since, he has pursued his passion for the sport. Throughout the many years of playing soccer, Gottlieb has had many important influences along the way.

“I’m thankful to all of my coaches who have put in countless hours to see me grow to where I am today on the playing field,” Gottlieb said. “I am very grateful for mentors like Coach Moore, Coach Sabio and Coach Thelen who have helped me at Reynolds. I am also very thankful for Mack, a wake student who has been willing to help me out before and after practices to make sure I am feeling sharp before our games.”

Thomas Moore, a coach for the Demons has had the opportunity to guide and coach Gottlieb as an athlete.

“Noah is the type of captain that started off quietly but throughout the years learned that he needed to be more vocal,” Moore said. “He began embracing his leadership from the goal, and has been able to stand as a voice for the defense this year. He is always willing to listen to the coaches and is a great example for players to come.”

Gottlieb has enjoyed his years playing soccer at Reynolds and has gotten close to many of his teammates.

“I love the guys on the roster and being so close as a team has helped us on the playing field,” Gottlieb said.

Gottlieb proves to be someone who he teammates to look to in times of need.

“Noah is a good player who makes big plays, he encourages the team when they are feeling down, and wants to best for every one of us,” senior Hugh Bray said, a teammate of Gottlieb.

Gottlieb has been able to strive on and off the soccer field. His family has been with him along the way and have pushed him as a player and a leader.

“My family is my strongest support network, they are the biggest reason for why I am who I am today,” Gottlieb said.

Noah Gottlieb continues to support the boys varsity soccer team throughout the state championships before his last season as a demon comes to an end.