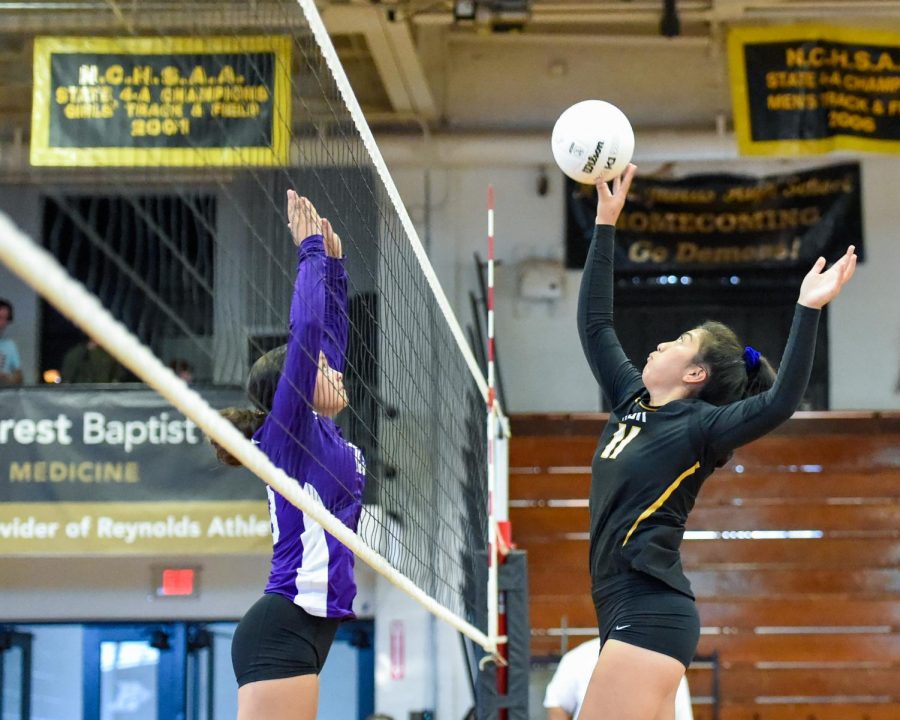 You might recognize Senior Liz Savaiinaea from her impressive abilities on the volleyball court, which earned her an all-conference award this past fall but what many do not know is Savaiinaea’s recent move from her birthplace in Hawaii, as well as her plans to graduate early and enlist in the Navy.

In the summer before her junior year, Savaiinaea relocated to North Carolina. It was because her step-dad, Sergeant First Class Bethea, had retired from the Army. With better job opportunities for her mother and lower living expenses, Savaiinaea’s family moved to Winston-Salem, where her step-dad took the position of JROTC Army Instructor at Reynolds. Living and going to school however, was very different to her 4,692 miles from home.

“Adjusting to life here was alright, it was not bad … the environment is different because there is a different diversity of students here,” Savaiinaea said. “School here is very different, the buildings look like the ones I saw in the movies.”

Joining the varsity volleyball team and sitting in on her dad’s instruction of JROTC helped ease the transition into public school in the mainland United States.

“Joining the volleyball team helped me make new and amazing friends I can relate and talk to,” Savaiinaea said. “Being around the JROTC room a lot because my stepdad is the teacher, has also led me to meet new people.”

Still, Savaiinaea missed the family, friends and life she left back in Hawaii, including the warm weather, Hawaiian cuisine and proximity to the beach. Her biological father and younger brother still reside in Hawaii, who she keeps in touch with through FaceTime calls.

Savaiinaea first began playing volleyball in third grade back in Hawaii, where she enjoyed playing on the beach with friends. Ever sense then she has loved the sport.

“She filled a position we needed desperately,” varsity volleyball Head Coach Leann Myers said. “She brought experience and skill that we have [traditionally] not had.”

At Reynolds she served as a key player for the Demons where she ran the offense as the setter, the equivalent to the quarterback or point guard in football and basketball respectively.

“Being from Hawaii, they play volleyball all the time so luckily she comes in and even though she is not a setter, [because of] her vast knowledge in playing all positions, she is helpful anywhere on the court and was able to come in and set for us,” Myers said. “It’s her openness to play every position … that is great from a coaches point, that you have players that are very open to moving around and know that [they will] do whatever is best for the team. She’s always been that way.”

On the court Savaiinaea was known to be rather easygoing and quiet but worked hard to make important blocks, serves and sets for the Demons.

“When playing I always make sure that I’m giving 100% and playing the setter position as best I can to help the team,” Savaiinaea said. “I just try to make sure I’m doing my part so that as a team we can get better.”

Her involvement in Reynolds has revolved around the Varsity Volleyball team and JROTC program, where she waits for her step-dad to finish teaching in the afternoons.

Savaiinaea’s interest in the armed forces first peaked in her freshman year when she attended Moanalua High School in Hawaii. Ironically, she had a curiosity in the JROTC program but never joined because she did not think she would serve in the armed forces.

A source of inspiration for her interest derived from her step-dad, retired Sergeant First Class Joaquin Bethea. Sergeant Bethea has 23 years of military experience in the Logistics Sector, completing five different deployments. At Reynolds, Bethea hopes to inspires the next generation of American citizens.

“We coach and mentor young individuals into the person they want to be,” Sergeant Bethea said.

To Savaiinaea, her step-dad was a big help in her adjustment to Reynolds, as well as her future plans for after high school.

“Sergeant Bethea expects the best from me and wants to make sure my future is set,” Savaiinaea said. “That’s why I think he’s such an important figure on campus, because lots of students look to him for help and guidance.”

After graduating in January, Savaiinaea plans to take the rest of the year to work and research careers in the medical field. In July she will be off to Chicago, Illinois for two months to complete basic training. Afterwards, she will spend five months in Texas to become a Hospital Corpsman, an enlisted Medical Specialist in the United States Navy.

Enough praise cannot be said about Savaiinaea and her commitment to the varsity volleyball over her two years as a Demon.

“Some people get frustrated and you can see it in their faces, and it comes out in their playing,” Myers said. “If she is frustrated she just keeps pushing through it. You can see through her play her desire to win and it’s that kind of thing that the other coaches in the conference saw when they voted her for all-conference. It is her knowledge, her skill and that drive to be the best and win.”