Are people fake on social media? 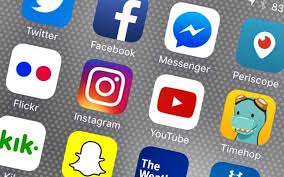 Social media has evolved so fast in the past 10 years it is unbelievable. If you compare technology from the year 2000 to now the advances are breathtaking. Phones were only used to call someone for emergencies. Now people use phones to post on Instagram, play games or even worse, only have contact with person through a streak on snapchat. Most of the time you aren’t even talking; you are just sending useless pictures of yourself that will never be seen again in five seconds. Some people use social media to create a person that other people would want them to be instead of who they actually are. There are apps now called Facetune, Afterlight, and even VSCO that change the appearance of the photo to something they think more people will like. It has driven this generation of selfie-sticks and green screens off the edge to sharing every detail of our lives on a social media just to make sure people who view it see them in a perfect way.

There is a lot of competition on social media. People are now becoming famous for simply ‘posting a picture.’ It is just them taking a picture of themselves and competing for likes or comments. There is no actual meaning for social media besides genuinely wanting to see people and what they’re up to. We have become so blinded by the fact that social media has been turning so many people into something they’re not and cutting off the face-to-face connection with people who now you only see through a phone.

I think social media is good to stay in contact with people who live far away or you don’t see as often. However we do not use our phones for calling people anymore. It’s like we only connect with them through what they post.  I also think there are better ways to communicate with people all over the world than just a picture of our face with a useless caption. We need to find something interesting to talk about so we can really build a connection with people and possibly help something like climate change or spread awareness about wars. I think we take advantage of having the benefit of communication from so far away; we need to do something more. Imagine how much of a difference it would be, if instead of posting a selfie you post ideas or an awareness about news that may not be heard. We need to do something that actually matters.

I wanted to really understand how much social media affected me so I deleted instagram for 2 months. I realized I was much happier with myself without looking on my phone and seeing what people posted on Instagram and how interesting their life is. Too many people compare themselves to people on Instagram and it’s not healthy at all. You might feel left out or that you’re going to miss out on something but most likely it’s not even that important. I would definitely encourage people to delete all there social media for however long just to change your daily routine.