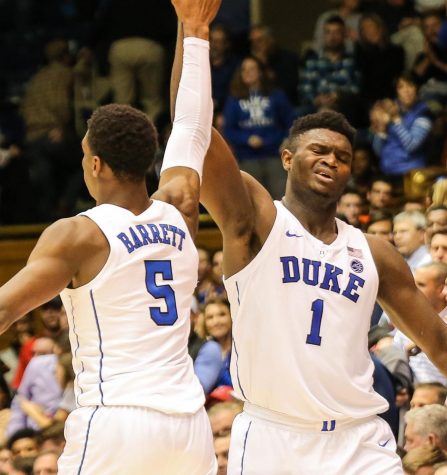 Each year around the month of March, a special sporting event occurs in the collegiate arena. This is the National Collegiate Athletic Association (NCAA) Basketball Tournament, this tournament sets the top 64 teams in the country against each other to compete for the NCAA title. This tournament is renowned for crazy upsets and close games, as the whole month of March is known as “March Madness”.

As usual, there are a couple of teams that are expected to make a deep run in the tournament. Duke university is expected to be in contention for the title once again this year with a current rank of second in the whole country, just behind the top seeded Tennessee Volunteers.  Duke University has shown once again why it deserves a spot at the top of the list, as the team has been playing at peak performance due in part to freshman Zion Williamson who has become a force to be reckoned with on the court. Williamson who stands at 6 feet 7 inches and weighs 285 pounds makes his mark on the game with incredible dunks and blocks as well becoming a defensive nightmare for opponents.

With the combined might of Zion and other impactful players, as well as Coach Mike Krzyzewski, it is hard to imagine Duke being beaten by hardly anyone.

“Duke will win [NCAA Tournament] because they have the best Coach and the best overall team”, Billings said.

As the tournament begins to take formation, students at RJR are getting geared up to watch their favorite teams compete for the title.

Many students also watch the games to find out what the atmosphere is like for colleges that they are planning on applying to. One such example is junior Ryan Gallagher.

“I watch the NCAA tournament to see what the school’s student section is like, so that I know if they are cool or not”, Gallagher said.

Ryan and many other students are looking for potential colleges to attend, and the NCAA tournament is a big factor in what makes the perfect college for each student.

The NCAA tournament is a very impactful event all around the country but especially at RJR. The tournament plays a big role in the students lives outside of school and their decisions for college. As usual, the month of March is sure to be filled with lots of madness, as students begin gearing up for the big tournament.

“I can’t wait for March Madness this year, the games are gonna be epic” Gallagher said.