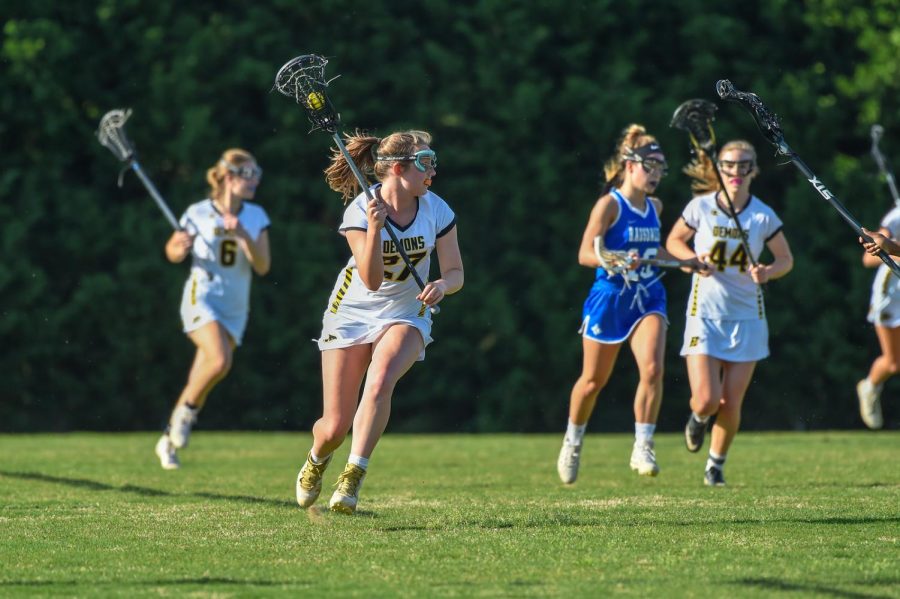 Winbourne Broughton takes the ball down the field against Ragsdale.

The girls lacrosse team hosted a final four game against Charlotte Catholic last Tuesday at Deaton-Thompson. Demon fans showed out in masses to watch the highly anticipated match up.

“It was really exciting to have the Rowdies out, and have such a huge student section,” said senior lacrosse player Katie Dalrymple. “It made the game so much more exciting for us, we were glad that so many people came out to support us.”

Within seconds of the first draw, the crowd erupted as freshman Lucy Dixon scored to give RJR a 1-0 lead. While the Demons went on to lose 18-6, the enthusiasm around that first goal is a better representation of the way the rest of their season went.

The girls had an overall record of 12-2, and they rode an 11 game win streak into the final four game. The Lady Demons ran the CPC, with an undefeated record and a conference championship. Another highlight of the season was their game against conference rival West Forsyth in the third round of the playoffs. Sophomore Winborne Broughton scored a game winning goal in overtime to beat the Titans 11-10.

The Demons kept improving their game as the season went on, which ultimately put them in a the position to make a Final Four run. This special team was the first girls squad from the area to reach the state semifinals in conference history.

“Every single game we got a little bit better, which helped us get to the final four. All our hard work paid off,” said Dalrymple.

The team had eight seniors this year, and their leadership and experience were vital in the team’s postseason push. Caitlin Casey led the team with 35 goals, and Katie Dalrymple led the team in assists with 21.

At the sports banquet earlier this week, Casey won the Bryson award and Dalrymple the Caldwell award for their outstanding performance, leadership, and sportsmanship throughout their Reynolds lacrosse careers.

On average, the Demons scored 14.3 times each game, while only giving up 5.2 points to opponents. This is in large part due to the stifling defense, anchored by seniors Maggie Welsh, Millennium Sheriff, and Sophie Macon.

While the leadership of these eight seniors will be missed, the team’s future still looks bright.

“It’s always tough to lose seniors, but we always lose seniors so it’s not a new issue for the team,” said Dalrymple. “But it allows new people to prove themselves as leaders, so I don’t think it’s really a bad thing.